NATURAL VENTILATION IN THE CONTEXT OF SARS-CoV2 (April, 2020)

The SARS-CoV-2 virus has so far infected more than 2 million people around the world, and its impact is being felt by all. Patients with airborne diseases such as Covid-19 should ideally be treated in negative pressure isolation rooms. However, due to the overwhelming demand for hospital beds, patients are being treated in general wards, hospital corridors, and makeshift hospitals.

Adequate building ventilation in hospitals and public spaces is a crucial to contain the spread of disease, exit from the lockdown situations and reduce the chances of subsequent waves of outbreaks.

The MAGIC team is looking at how to use displacement ventilation (either mechanical or natural ventilation), where air intakes are at low level and extracts are at high level, as a viable alternative to negative pressure isolation rooms, which are often not available on site in hospital wards and makeshift hospitals. Displacement ventilation produces negative pressure at the occupant level, which draws fresh air from outdoor, and positive pressure near the ceiling, which expels the hot and contaminated air out. The team will look at whether a lack of openings, in some settings, can be supplemented by installing extraction fans.

Our aim is to provide guidelines for such mechanically assisted-naturally ventilated makeshift hospitals, and for public spaces such as supermarkets and restaurants. Our results will be published on this page. 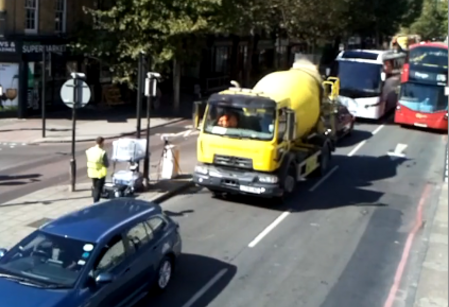 One of the interesting things coming out of the September field study at the LSBU site is the very high NOx and NO2 concentration spikes seen when high emitting vehicles pass the roadside sensor. This includes heavy goods vehicles, bin lorries, skip lorries or coaches.

Below (Figure 1) is a time series plot of the NO2 (blue) and NOx (red) concentrations measured at the roadside at the field study junction in Elephant and Castle. Also shown are the number of vehicles waiting at the lights in the lane nearest the sensor. It can be seen that each concentration peak corresponds to a number of vehicles waiting at the lights, with a lorry or a coach usually present.

At roughly 13:06 there is a particularly high spike in NOx, with concentrations reaching >2000ppb. This spike corresponded to the passing of a cement mixer lorry (Figure 2). The cement mixer lorry has a secondary engine used to power the cement mixer. Secondary engines are regulated to a much lower standard than main vehicle engines. As well as cement mixers, lorries with refrigeration units have secondary engines. The big spike in NOx seen at 13:06 is likely due to the secondary engine, which are known to have much higher NOx and PM emissions than allowed under modern Euro emission standards. These engines use “red diesel”, used by Non-Road Mobile Machinery (NRMM) which is taxed at a much lower rate than road diesel. Campaigners have long called for this tax loophole to be closed to encourage the use of cleaner alternatives such as liquid nitrogen or electric.

These peak concentrations at the roadside are missed by static sensor networks. Most air quality models will also miss these peaks due to insufficient spatial and temporal resolution. Further, the epidemiological estimates of the impact of pollution exposure on health depend on these lower resolution models and do not account for the full variability of street level concentrations.

On the MAGIC project we plan to use Fluidity’s ability to simulate high resolution dispersion at the microscale to investigate to what degree these peak concentrations contribute to overall pedestrian exposure, and what measures can be taken to reduce exposure within urban areas. 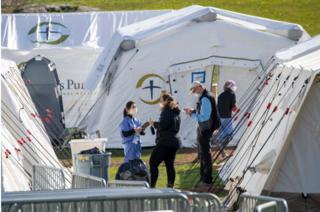 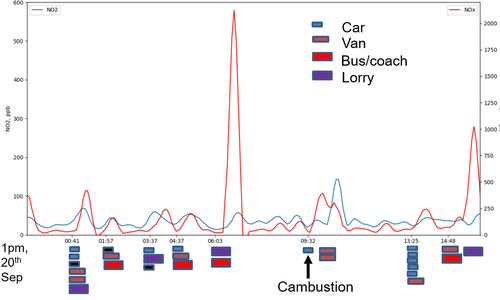 Figure 1: Instantaneous plume (green) dispersion past (a) a normal facing cube and (b) 45 degree building with pitched roof.Type your paragraph here.

In September 2019 we ran a 2-week intensive field study at London Road next to London South Bank University (LSBU). Our aim for this study was to collect data for calibration and validation of the different MAGIC models.

Originally, the idea was to replicate the 2017 study which involved various low-cost sensors developed by the MAGIC project. In 2017 these sensors were based along a stretch of London Road just South of St Georges Circus and also inside a room in the LSBU Clarence Centre. This time we decided to also add a camera to obtain traffic information with the hope to be able to determine the effect of traffic on pollution levels.

As planning progressed, we were lucky to have TfL join us. TfL agreed to change the signal timings at the Garden Row/London Road junction to see whether doubling the cycle time would lead to a decrease in emissions. It became clear very quickly that we would need high precision and high time resolution sensors to really be able to understand the effects of the changes in signal timings. As these high cost sensors are quite power intensive and supposed to be run indoors on mains power, we had to design various bespoke battery systems to power these instruments and find boxes to protect the sensors against rain.

We relied heavily on the help and support of the team at LSBU, including the security staff and lab technicians who enabled us to move and store our equipment safely, and Elsa Aristodemou, MAGIC PI, who coordinated the LSBU team. Thank you for all your help!

Figure 2: Cross-section of plume 95% percentile at half a building height downwind of the building for (a) the normal facing building and (b) the pitched roof at 45 degrees.Type your paragraph here.

A novel methodology based on a Weak Constraint Gaussian Process (WCGP) has been successfully developed in order to advise on the optimal placement of pollutant sensors in a complex urban environment.

The question of optimal sensor placement is usually addressed using a Gaussian Process (GP) approach. However, the main limitations of traditional GP regression are its sensitivity to noisy input and computational complexity. Indeed the vast amount of real-life noisy data usually available makes the prediction quality in most applications non-optimal at best. The novel WCGP method developed in the context of the MAGIC project overcomes the computational complexity issues by decomposing the domain and therefore enabling parallel computations, while optimally dealing with noisy data by using a data assimilation approach that incorporates noisy input in a time window. The scientific paper, written by the MAGIC team members at Imperial College London and accepted recently in Journal of Computational Science, exposes in details the mathematical formulation of such an approach as well as the technical challenges and solutions adopted.

This innovative approach has been tested and has proved its efficiency on the LSBU area, i.e. MAGIC test site, under a westerly wind, in order to advise on the optimal sensor location. The sensors are optimally positioned such that they will provide the most “useful” data able to correct our predicted model, i.e. Fluidity (open-source CFD software). In other words, the sensors do not necessarily aim to capture peaks of high pollutant concentration. Instead, for example, they aim to give the data that will greatly improve the accuracy of the pollutant concentration predictions. In the picture opposite, as an example, the optimal location of the sensors as advised by a traditional GP (blue spheres) and our novel WCGP (red spheres) are shown when the LSBU site is subject to a westerly wind. The time it took to output the sensors locations was about 8 times faster with our WCGP (~11H) than using the traditional GP (~100H). Moreover, the parallel implementation of the algorithm allows to speed up the process up to 13 times when run on 16 cores. 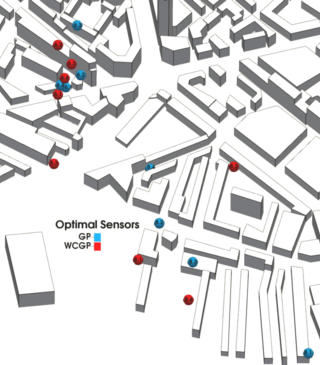 Figure 1: NOx and NO2 concentrations time series for a 20 minute period of the September field study.

Pressure distribution, and neutral height inside a naturally ventilated building.

Megan and her team have been carrying out experiments investigating the effect of temperature differences on cross-ventilation. The experiments are performed in a large flume, with a cross-sectional area of 2 m x 1 m. Into the flume is placed a model room, which is a 0.5 m cube.

Before the start of an experiment, the water inside the model room is heated and dyed. The flume is switched on, to provide a flow past the model room, modelling the effect of wind. Two windows are opened on opposite walls of the model room, one at the front, facing the wind, and one at the back.

Recent experiments have examined the effect of temperature on cross-ventilation. Results show that the major effect of the initial temperature difference between the room and ambient is to create a two-layer stratification, reducing the effective volume of the room. New theory indicates that the temperature difference does not significantly impact the ventilation flow rate through the windows, but the change in effective room volume alters the timescale over which the room is ventilated. These results are currently being written up for publication. You can read a summary of the findings here.

In the video, Will explains his work recreating the London test site in the Enflo  wind tunnel at the University of Surrey. Will is now building a scaled-down replica of our Cambridge test site for the next phase of wind-tunnel experiments, and he has already created a drawing of each of the 167 model buildings.

This project, funded by the Atmospheric Dispersion Modelling Liaison Committee (ADMLC) and in partnership with CERC, makes use of the advanced computational fluid dynamics (CFD) and wind tunnel capabilities within MAGIC to assess the performance of Gaussian plume models at short time and length scales. Gaussian plume models were initially developed 40 years ago for application to nuclear power facilities and accidental releases, and have since been developed for use in regulation of stack releases, odour releases and urban air quality analysis. These models are popular with regulators and designers as they give good estimates for long term averages and are very quick to run. However, these models are not designed for problems over length scales of meters, or for problems such as puff or instantaneous releases, where short time scales are relevant. CERC’s Atmospheric Dispersion Model System 5 (ADMS5) is an advanced Gaussian plume model. ADMS5 possesses features such as a building model and fluctuations model. Comparisons were made between the ADMS5 building model and Fluidity CFD simulations validated against wind tunnel experiments undertaken the University of Surrey.

The ADMS5 building model simplifies buildings with roofs or at oblique angles to the prevailing wind direction into a single, normal facing building with an equivalent frontal area. The flow features around a normal facing building are well understood and therefore the model can then make assumptions on the nature of the dispersion of releases from the rooftop or from upwind locations. Over the short length scales considered in this project, building orientation and the shape of roofs may have a significant effect on plume dispersion. Figure 1a shows a snapshot of a Fluidity simulation of the instantaneous dispersion of a plume past a cube building, normal facing to a turbulent flow. Figure 1b shows an equivalent simulation for a  building set at a 45 degree angle to the approaching wind direction, with a pitched roof. The effect of the different building geometry on the downwind dispersion is clear, with a much increased dispersion for the pitched roof case.Type your paragraph here.

Comparisons such as these serve to inform our understanding of microscale dispersion and to evaluate the limitations of simpler models used day-to-day by regulators at such short time and length scales. 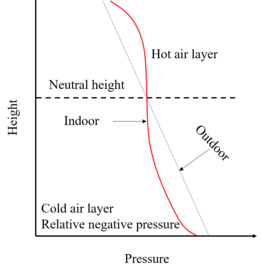 Envisaging a world with greener cities.

Makeshift hospital in the US 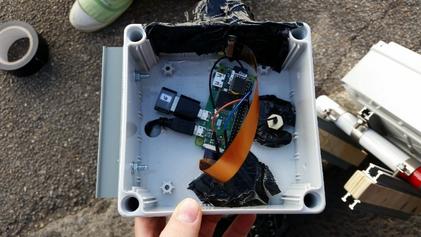 One of our Raspberry- Pi Cameras used on site